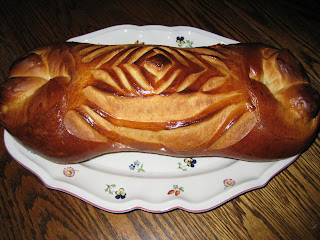 This is my first entry as a Lazy Baker and I must admit that in the past I secretly wished that I was part of the group so when Melinda invited me to participate, I was thrilled. The Duivekater, a sweet Dutch bread usually made between St. Nicholas, December 6, and Epiphany, January 6, was chosen by Melinda as a Lazy Bakers project and you cannot get much lazier than this.
Most breads are lazy projects, after all there are only a few minutes of actually prep time and then while the dough is rising you can go about your business or just continue to be lazy. The recipe is straightforward with no pre-ferment, no toasting or skinning of nuts (an exercise in futility especially with walnuts), no soaking of fruit, and no fancy shmanshy ingredients that you can’t find in your local supermarket.
I threw all the ingredients into the KitchenAid and using the dough hook mixed the dough. The dough was quite stiff I thought, and even though the recipe states that it should be on the stiffer side, I thought it could use a bit more milk. I carefully added a few drops of milk until the dough softened somewhat and continued kneading for a few minutes. 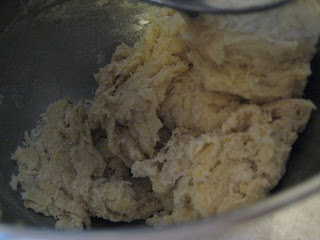 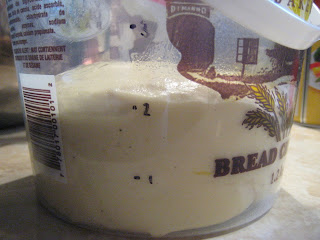 I placed it in my dough rising container. This large bread crumb container is the perfect size for many of the breads I make so rather than throw it out I converted it to a dough rising container. I measured and marked it with a permanent marker to accurately show when the dough doubles. I was quite pleased with myself and for my contribution to a greener earth. 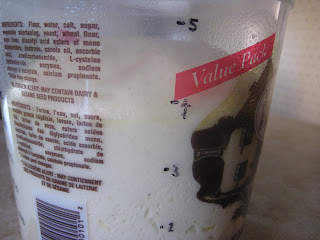 After about two hours I removed it from the container and shaped it into a ten inch torpedo shaped loaf. I made a four inch cut in the middle of each end and pulled the pieces to elongate them. I looked at the cut dough and thought it looked like a huge deadly virus sent by aliens to invade our earth. It does look rather sinister doesn't it? I was surprised how easy it was to stretch out the cut pieces without them receding back especially since I hadn’t rested the dough. I coiled the ends inward as the picture showed and placed the dough in a plastic bag for the final rising. About an hour later it was ready for the egg wash and decorative slashes. 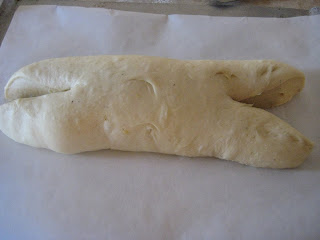 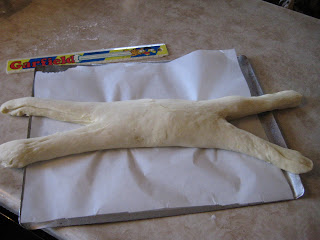 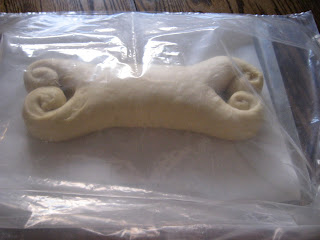 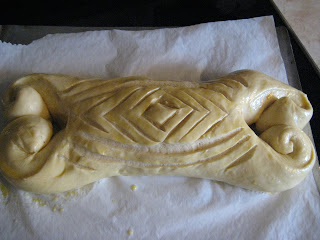 I wanted to be creative with the slashes but after some thought I combined a couple of designs I had seen on the internet. Slashing was pretty easy too – I thought I might have trouble with the intricate design but the stiff dough allowed the sharpened knife to slash the dough effortlessly. I placed the Duivekater into the preheated oven and set the timer for 35 minutes. As it was baking a lovely scent of bread baking and citrus wafted through the kitchen. Halfway through baking I looked in to see how it was doing and everything looked good except some of the deeper slashes had opened up a bit too much making the design not as sharp, otherwise I thought the bread was quite handsome and not alien at all. 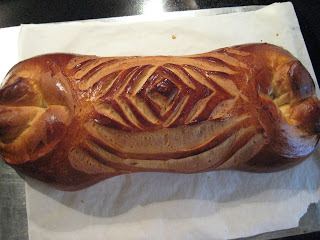 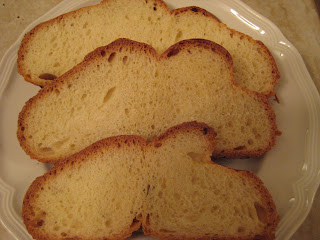 I had a slice after dinner and thought it was quite nice with the flavour of citrus and cardamom coming through with just a hint of nutmeg and I thought it would be perfect with a cup of tea. My daughter said it reminded her of panettone and my son said he really liked it and went for a second slice. The next day I brought some over to my parent's for them to enjoy and by evening the entire loaf was gone. I enjoyed making this bread – I hope the Dutch approve.
Posted by doughadear at 4:30 PM

Fantastic! Your duivekater looks terrific. I do love the 'skinned cat' look of the stretched out dough!
I am impressed with your results.
I am glad it tasted good. With all the lovely breads that you do, it had some competition for your family's affection!

I thought I would try making this tomorrow. I have the day off and the spare time.
Your début as a Lazy Baker can only be criticized for your quickness to the task. Marie has some competition now!

Melinda,
The stretched out dough looked like different things to different people. My sister-in-law, said it reminded her of Pebbles, her PomaPoo when she lays on her stomach with her back legs splayed out. I also thought it looked liked a skinned animal. My daughter and husband thought it looked like a chicken. Then I remembered this photo from Julie/Julia: http://hieats.files.wordpress.com/2009/07/juliax1.jpg Can you see the similarities?
I look forward to seeing everyone's
elses Duivekater. This is a lot of fun.

I just had a look at the link you gave and... YES, I can see a similarity! hohoho

ohmygosh you already made the bread? it looks wonderful and your post has given me many hints as to how to do this whole bread thing. thank you!

Jennifer,
Ya, just give me a bread recipe that looks interesting and I'm just raring to bake it and because it was a lazy bakers project I was an eager beaver.
I'm especially happy that the posting will help you out.

That is so beautiful! But, really, what are you doing taking my place as the obsessive-compulsive rule follower? That's my role, and now I'll have to find another one. I've been on a baguette kick lately, but it's time for a change. (My word verification word was "redistok"--it sounds kind of like it might be the Dutch word for lazy baker).

Marie,
Honestly, who does this newbie think she is any way? The last thing I want to do is bump your status as O.C. rule follower, but if I could I would like to be a close second – for now.
So what’s the next “redistok projekt”.

oriana, i decided i should check out your bread, and i am delighted to see that i am still the ruling queen of laziness when it comes to baking.
your bread is amazing, and i think everyone's has looked just a bit stretched out dead animalish....you are not alone.
it really is quite beautiful, golden and shiny!

Jini,
Thank you for stopping by. Will you be baking this bread? It was a lot of fun making it and it was all gone by the next day.