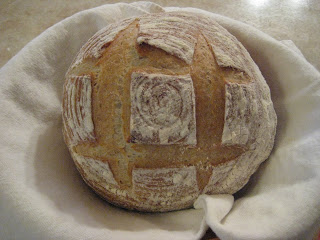 I'm afraid I collect cookbooks like some women collect shoes. That might not be the best analogy in my case but you get the point. I cannot resist buying cookbooks and should that cookbook be on bread promising an artisan type loaf or even better a glorious fruited bread out of your own oven, well then I'm sunk, hook, line and sinker. Sometimes I will buy several books at the same time and as much as I try to bake something from all of them, one or two will inadvertantly end up on the book shelf unused until I am inspired to try something new. So for this bread I turned to Local Breads by Daniel Leader, a first from this book. Flipping through the pages I came across a recipe for French Country Boule (Pain de campagne) that sounded pretty good to me. You certainly can't go wrong with a bread made from a sourdough culture and with my trusty culture in the refrigerator waiting for expansion I was well on my way. 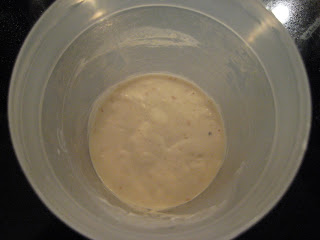 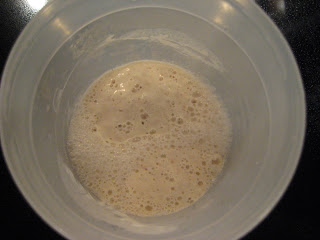 The night before I added some water and flour to the liquid soughdough culture and by morning it had doubled. 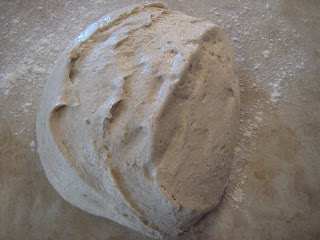 The dough has some whole wheat and rye flours as well as A/P flour and mixed up to a lovely dough. It is a fairly soft and tacky dough so it needs a banneton to support it in its final rise. The recipe makes two boules and I only have one banneton so I improvised by using a bowl lined with a clean cotton towel. The banneton and towel lined bowl have to be heavily dusted with flour to ensure that the dough doesn't stick and I have to admit I always fret about this step as I have had stubborn fully risen doughs that have not pulled away without some persistant coaxing. I'm always afraid that I will be left with a completely deflated loaf. 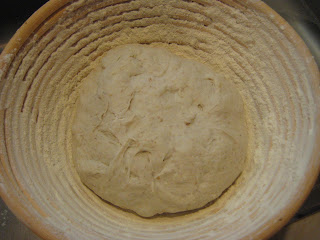 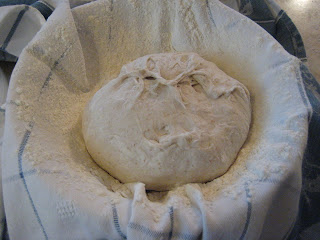 But this was not the case with this particular bread and they both came out of their molds without a hitch. Of course I had flour flying all over the place but at least my boules were intact. Scoring the bread wasn't easy - either my serrated knife wasn't sharp enough or the dough was too soft and I think I'll blame the latter. In any case I managed to score each bread differently mostly because the criss cross design took some doing so I opted for a more straight forward slash for the second boule. 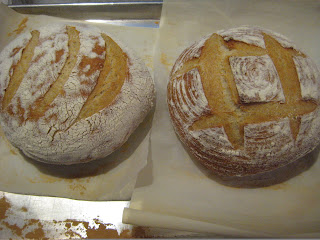 After baking the boules in a 400 F. oven for about 25 minutes they were done. I thought they looked pretty good. After cooling I just had to have a taste and I was not disappointed at all. The bread is quite springy with a very nice crumb so a sharp serrated knife to slice through easily is key. I certainly would make this bread again. Mr. Leader you make good bread. 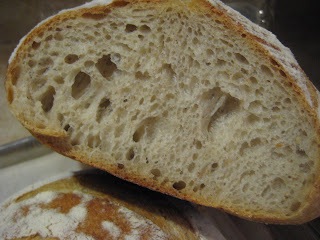 On the very day that I baked these boules a package was delivered to my door. I wonder what it could be. It was too thin to be from Zappos. 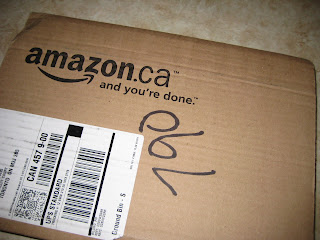 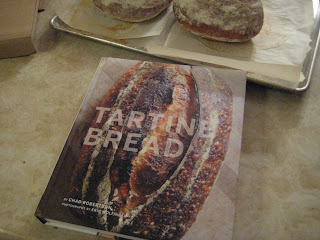 As I mentioned I'm a real sucker for bread cookbooks and when I read about this one I just had to order it.
French Country Bread
Pain de champagne
Liquid Levain Starter
50 grams liquid levain
175 grams Water, tepid
135 grams Unbleached all-purpose flour
Pour the liquid levain ito a small bowl. Pour in the water and stir with a rubber spatula. The levain will froth. Mix in the flour until the mixture is fairly smooth, scraping down the sides of the bowl. Cover with plastic wrap and let stand at room temperature for 8 to 12 hours. When ready, it will have expanded by about one third and the surface will be bubbly, like a large pancake ready to be flipped. It will have a wheaty fruity, mildly tangy aroma.
Bread Dough
250 grams Water, tepid (70 to 78 degrees)
440 grams Unbleached all-purpose flour
30 grams Stone-ground whole wheat flour
30 grams Fine or medium rye flour
310 grams Liquid levain starter
10 grams Sea salt
Pour the water into a large mixing bowl of a stand mixer. Add the bread flour, whole wheat flour, and rye flour and stir with a rubber spatula just until it absorbs all the water and a rough dough forms. Cover with plastic wrap and let stand at room temperature for 20 minutes to hydrate the flour and give the gluten a chance to develop on its own.
Add the Levain in and Salt. Stir the levain with the spatula to invigorate and deflate it. Scrape it into the bowl of dough. Sprinkle the salt over the dough. Use the spatula to blend the levain and salt into the dough.
Use the dough hook and mix the dough on medium speed (4 on a KitchenAid mixer) until it is smooth, 8 to 9 minutes. It will be soft and tacky but will clean the sides of the bowl.
Ferment the Dough. Transfer the dough to a lightly oiled, clear, straight-sided 2-quart container with a lid. With masking tape, mark the spot on the container that the dough will reach when it has doubled in volume. Cover and leave it to rise at room temperature (70 to 75 degrees) until it inflates into a dome and reaches the masking tape, 2-½ to 3-1/2 hours. It will feel springy and less sticky.
Divide and shape the boules. Heavily dust the bannetons or two bowls lined with kitchen towels with flour. Lightly dust he counter with flour. Scrape the dough onto the counter. With a bench scraper or chef’s knife, cut the dough into 2 equal pieces (560 grams each). Shape each piece into a boule. If you don’t achieve a perfect round, leave it. It’s important not to overwork the dough. Place each round, smooth side down, in a prepared banneton or bowl. Lightly sprinkle with flour and cover loosely with plastic wrap.
Proof the boules. Let the boules stand at room temperature until they become pillowy and nearly double in size, 1 to 1-1/2 hours. When you press your fingertip into the dough, the indentation will spring back slowly.
Prepare the oven. About 1 hour before baking, place a baking stone on the middle rack of the oven and cast-iron skillet on the lower rack. Heat the oven to 450 degrees.
Score the Boules. Lightly flour a baker’s peel or rimless baking sheet. Uncover the loaves and tip them out onto the peel or sheet, guiding them fro a soft landing and arranging them at least 2 inches apart. With a lame, a single-edged razor blade, or a serrated knife, make 3 parallel slashes centered on each loaf, each about ½ inch deep.
Bake the boules. Slide the loaves, still on the parchment, onto the baking stone. Place ½ cup of ice cubes in the skillet to produce steam. Bake for 15 minutes. Reduce the heat to 400 degrees and continue to bake until the boules are red-brown, 20 to 25 minutes.
Cool and store the boules. Slide the peel or the rimless baking sheet under the parchment paper to remove the loaves from the oven. Slide the loaves still on the parchment, onto a wire rack. Cook the loaves completely, about 1 hour before slicing. Store the cooled loaves in a brown paper bag. They will stay fresh for about 4 days. For longer storage, freeze in resealable plastic bags for up to 1 month.
Posted by doughadear at 9:00 PM

I knew we were kindred spirits when reading about your cookbook collection. But it seems the crucial difference is that you actually USE your books to create remarkable wonders. Your breads look fabulous--Yum!

Sandra,
I still have a few books that I have not baked from but I hope to change that. I would like to try a few more from Local Breads by Daniel Leader(I won't commit to all the recipes)that look interesting.

I arrived here via the Wild Yeast Blog. I've just baked this recipe and it's really good, so thanks for posting it. I've put the bread book on my Amazon wish list—you can't have enough recipe books!

You've got a typo in this sentence "until it inflates into a dome and reaches the masking..." which really needs fixing.

Francis,
I'd like to welcome you to my blog. I'm always happy when someone tries a recipe I've posted and that it turns out well, even if it was developed by someone else.
Thank you for bringing the error to my attention, like you said it really did need to be fixed.

hi would it be ok with you to change the grams of liquids with cups or ounces please..and thank you..

thanks for the recipe they are in the oven now my starter is still young so a tad under proofed but other than that so far so good a couple more typos in the transfer with peel paragraph you say fro instead of for and in the cooling paragraph you say cook instead of cool the second time i figured it out obviously but you never know what others will do and thank you again it smells delish!!!!