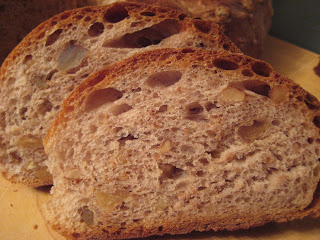 After running some errands, Randy and I decided that we would go out for pizza instead of going home to cook dinner. We wanted to try the newly opened pizza place on St. Clair Avenue with a rather interesting name of Pizza e Pazzi.  The direct translation to this is not Crazy for Pizza or Nuts for Pizza but Pizza and Crazies. Wow I thought, only the Italians with their romantic language can get away with a name like that. I imagined opening up a pizza joint and calling it Pizzas and Crazies and laughed thinking that no one would set foot in the place, yet Pizza e Pazzi constantly has lineups out the door. 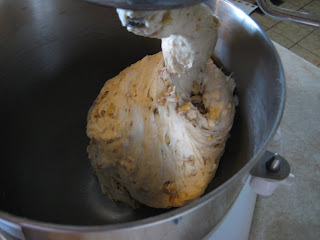 Even though we were there for pizza, shortly after we were seated our server brought us a basket of assorted breads, which they informed us are baked daily on the premises. Randy chose a chiabatta bun and I opted for a slice of walnut bread. After smearing the bread with a pad of butter, I was quite pleased with my choice, and had that basket included a wheel of brie and some olives I could have easily called it dinner and left quite satisfied. 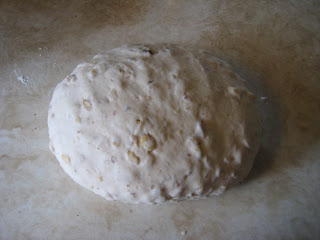 A few days later as I once again leafed through the Italian Baker by Carol Fields I happened to come across a recipe for Walnut Bread, and with the incredible slice I'd had at Pizza e Pazzi still fresh on my mind there was no doubt I would give this recipe a try. 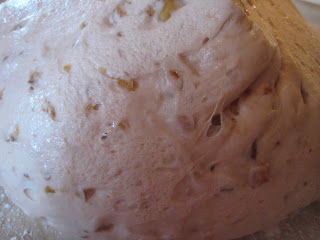 I was quite happy that the recipe was for a straight dough method which meant I could get started right away.  The only extra step in this recipe was to toast the walnuts lightly. I was so happy that I didn't have to rub the skins off the walnuts, a step I loathe because as much as I rub I rarely get enough skins off. 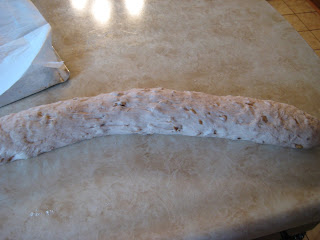 The walnuts were added to the dough while it was mixing in the KitchenAid as opposed to adding the nuts by hand after the dough has been kneaded for awhile which made the whole process very easy. 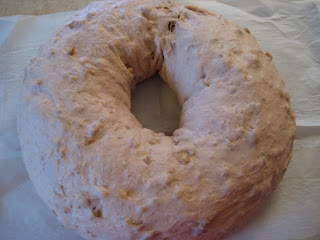 After one rise I shaped it into a long log and joined the ends to form a ring. 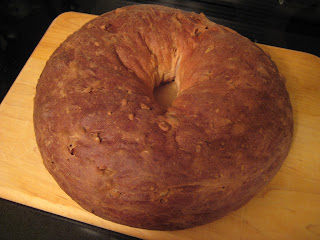 After about 50 minutes in the oven you are rewarded with a very large ring worthy of oohs and aahs. 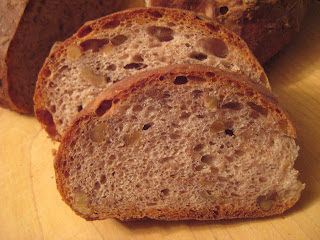 The difference between this bread and the bread I had at Pizza e Pazzi was that this bread's crumb was much darker as if it had been made with whole wheat flour. The darker crumb, however, comes entirely from the ground walnuts. And as far as taste I'd almost say that this one was better. It was especially good on its own with some butter. In her introduction Carol Fields wrote that Italians like eating this bread with soft fresh cheese but I thought it would also make great chicken sandwiches as well. With a ring as large as this one was I was able to have my fill and store some in the freezer. I highly recommend this bread and if you like nuts in your breads you'll go crazy for this one.

Toast the walnuts on a baking sheet in a 400 F. oven for 10 minutes.  Chop the walnuts to coarse crumbs with a sharp knife or in a food processor fitted with the steel blade.

Stir the yeast and honey into the water in a mixer bowl; let stand until foamy, abut 10 minutes.  Stir in the oil with the paddle. Add the flour, salt and walnuts and mix until the dough come together. Change to the dough hook and knead until soft, moist, and fairly dense. 4 to 5 minutes.  Knead briefly by hand on a lightly floured surface.

First Rise - Place the dough in an oiled bowl, cover tightly with plastic wrap, and let rise until doubled, about 1 -1/4 hours.

Shaping and Second Rise - Turn the dough out onto a lightly floured surface. Without punching it down or kneading it, shape in into a log and join the ends to make a ring.  Your may place the ring in an oiled ring mold with 4 to 6 walnut halves set in the bottom, so that when the bread is baked and turned out of the mold the nuts are on the top. The dough can also be baked in a free-form ring or round loaf. Place the free-form loaf on a floured peel or oiled baking sheet. Cover the dough with plastic wrap and let rise until doubled about 1 hour.

Baking- Heat the oven to 400 F. If you are using a baking stone, turn the oven on 30 minutes before baking and sprinkle the stone with cornmeal just before sliding the loaf onto it. (I used parchment paper on a cookie sheet). Bake for 10 minutes. Reduce the heat to 350 F.and bake 40 minutes longer. If you are baking the bread in a ring mold, bake the loaf out of the pan on a baking sheet or stone for the last 10 minutes to brown the bottom and sides. Cook completely on a rack.

Oriana, will I ever be able to make the breads you're throwing my way so relentlessly? This one is so beautiful that it wins the bread beauty pageant I contest in my own head.

Gosia, I was away for a week and found your message on my return. Your comments are always so very kind that for a while my head is far too big for my body. Thank you.

We would like to present you the site Canadiandishes.com where users can search through tens of thousands of recipes from Canadian food sites and blogs.

Hoping to see you with us soon!

I realized today that I hadn't checked your blog for quite a while, and, when I did, saw that this was your last post. Are you done with blogging or just taking a vacation? My own posts are fewer and farther apart.
I love your posts--isn't carol fields wonderful?

Yammy,
Look so good,we also love pizza e pazzi .
Every time we go there we get inspired for a new recipe.
I think it will be the best pizza join really soon.

They do make good pizza!

I'd like to invite you to join our site www.erecipe.com . I really enjoy your blog and recipes and I think the over 8,000 unique daily visitors to eRecipe will too.
By joining eRecipe, we will provide the Nutrition Facts for every recipe you post in which you could customize and add to your blog. Viewers need and love to know the nutritional facts. Its a free service that we offer to blogs and recipes we really love. It looks professional and your members will love it.
Simply visit www.erecipe.com or contact me at michelle@erecipe.com. We look forward having you in our network!